Ahhh…  A nice late-season Eastern brown trout, and the bunny bugger tube fly that it ate.   A fish like this makes any trip well worthwhile. 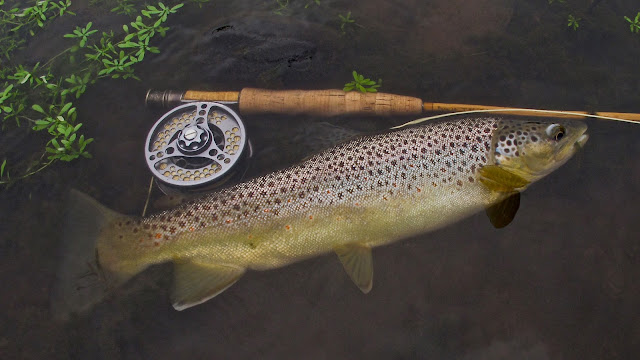 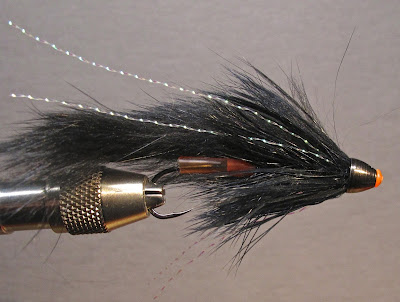 Many anglers who routinely fish for trout, smallmouth, and other freshwater fish, still think that tube flies are for steelhead and salmon.  But, as Ted Leeson just said in the Autumn 2015 issue of Fly Rod and Reel, "I now recognize their worth for a wide range of species…". Look back at our earlier blog post Trout Flies on Tubes or Tube Flies for Trout for more discussion on when and why to use tube flies.

This particular pattern, an all-black cone head bunny bugger has indeed done quite well for itself with steelhead.  And since we were on an eastern river known for its large brown trout, we figured we'd use a big fly with the intent of hooking a big fish.  Ta-da!  We hooked several very nice fish and and eventually lost all our flies to stupidity (dropping them in the current in our excitement), or by breaking them off on even larger trout.

So its time to tie more because we don't have any more, and because BIG landlocked salmon also love buggers on a crisp fall day.  So, we're going to show you our particular style for tying a bunny bugger in this tutorial, but a tan version (it photographs better and its just as deadly).  The pattern is the same for tan, black, and white (our top colors), or any other color or color combination you might care to tie.

Ted Leeson also points out in his recent review that 'the only hardware you need to get going (for tube flies) is the HMH Starter Tube Tool".  In this tutorial, however, we're going to use the Spinner vise, arguably the simplest, most effective dedicated tube fly vise available.  See it at www.hmhvises.com.

1.  Secure HMH Small Poly tube in vise and lay a thread base.  Note that we slid the pin inside the tube AFTER we clamped the tube in the vise - the pin acts only as a stiffener, which makes tying the semi-flex tube just a little easier. 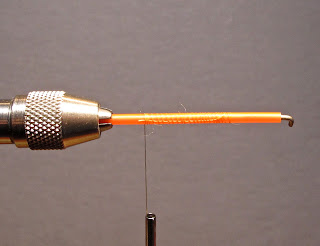 2.  Tie in rabbit zonker strip -- you can tie it long in the back because you can always trim it to desired length when you're done.  But make sure you leave enough of the zonker strip at the front end to reach the head of your fly. 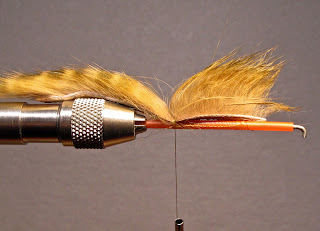 3.  Lift the front portion of the honker (a couple turns of thread help hold it up and out of the way) and tie in saddle hackle or schlappen, tip first, and then tie in body material.  We prefer schlappen because we're after a fairly lengthy and hairy underbody for maximum action in the water. 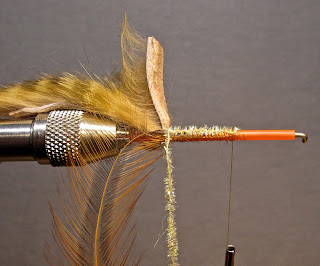 4.  Wind the chenille forward.  By using micro-chenile for the body, we can choose to wrap one, two, or three layers and thus have much more control over final body dimension and profile.  In this case, we wrapped three layers. 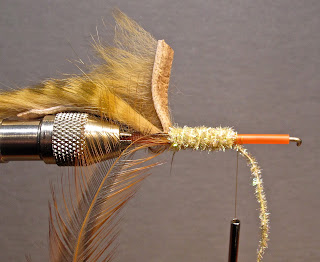 4.  Trim chenille, and palmer hackle forward and tie off.  But don't trim hackle yet - we'll use it later to finish off the head before installing the cone. 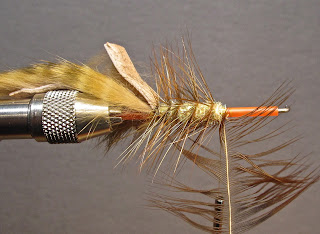 5.  Now we add a bit of flash. You can do so, or not, depending on your whim.  And of course, you can choose what ever type of flash you like to use. 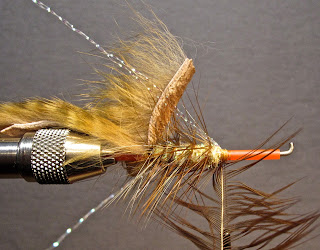 6.  Pull the fore piece of honker strip forward and secure it at the front of the body material, and trim.  Don't cut your thread like we do all the time. 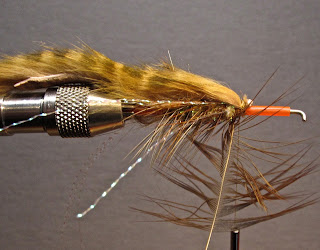 7.  Now, wrap the remaining hackle tight to the rabbit strip.  Tie it off, trim it close, and then make a whip finished head and trim thread. 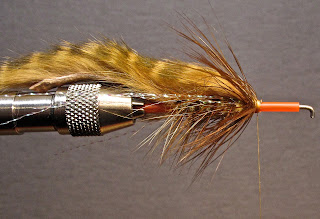 8.  Time for the cone.  HMH Medium cones are pre-drilled precisely to fit HMH small poly tubes.  We're using brass, but you can opt for black or nickel finishes.  Slide the cone onto the tube and snug it up tightly to the front of the fly.  Remove the pin. 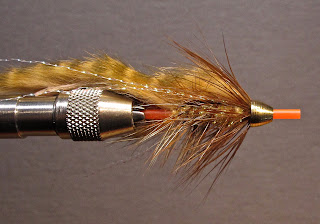 9.  Now trim the tube leaving about 1/16" - 1/8" extending in front of the cone.  Slide the pin back all the way into the tube and apply heat to melt the tube back and 'rivet' the cone onto the tube.  NOTE: don't touch the tube with the flame - just bring the flame close to the tube - and preferably slowly spin the tube while doing so, so you get a nice even button.  All this is very simple using the Spinner vise. 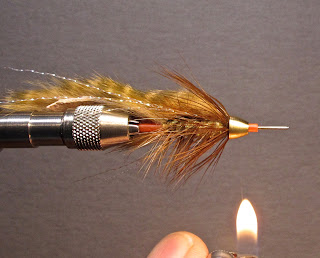 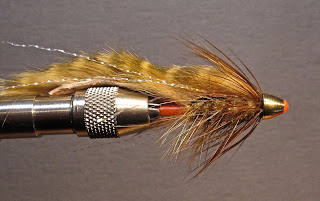 11.  Remove the fly from the vise.  Trim the back of the tube - how long you leave the tube depends on how far back you want the hook to ride in the pattern.  In this case, we left about 3/8" of tube extending behind the end of the body materials.  For this shot, we added a piece of hot orange hook holder. 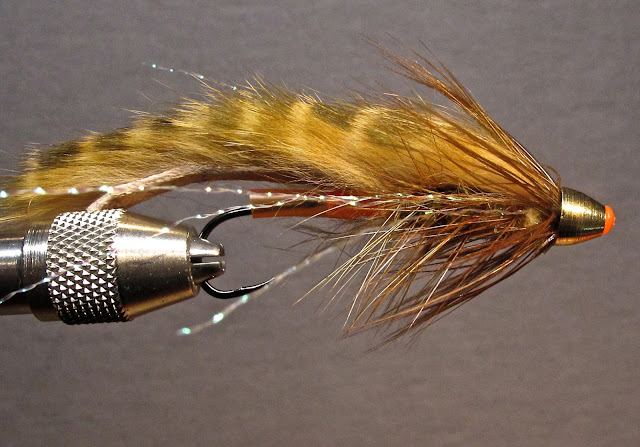 A deadly fly.  Stripped very fast, this fly will trigger some tremendous strikes.  Hang on.
Posted by Unknown at 2:32 PM 2 comments: